(article below by Pat Johnson, November 14, 2016, Business in Vancouver) 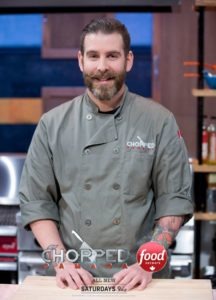 Can you turn cream of mushroom soup, matzo crackers, a lobster and grape jelly into fine cuisine? Chef Brock Bowes did – on national TV – winning the Food Network’s Chopped Canada competition with his lobster with pea shoots on cream of mushroom with bacon. The three judges agreed: “Brock rocked the lobster.”

Bowes is one of a disproportionate number of West Coast chefs who have taken home the title – and the $10,000 prize – from the competitive cooking show.

With a handlebar moustache and a tattoo of his dachshund wrapped around his wrist, Bowes has the friendly presence and personality of a celebrity chef. He’s in charge of two Kelowna kitchens: RauDZ Regional Table and the neighbouring Micro Bar Bites.

RauDZ focuses on Canadian produce, ideally Okanagan-local but definitely B.C.-fixated. Two doors down, at Micro Bar Bites, the theme is international wine, cocktails and spirits, as well as small plates.

Lately Bowes is experimenting at RauDZ with family-style service of butcher cuts of meat.

Read the entire article at the link below.