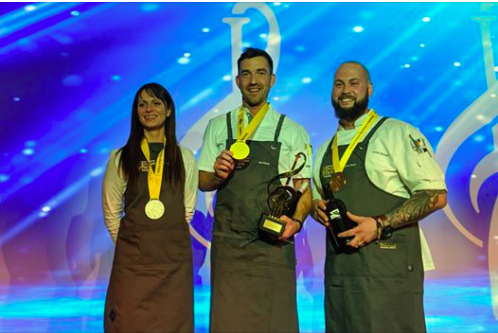 The following article was published by Kelowna Capital News, written by Mackenzie Britton.

The Great Kitchen Party wrapped up another delicious event Friday night with local chefs putting their skills to the test for the ultimate prize.

“I’ve been pinching myself all night being in the room with all these amazing chefs, and then what happened, happened. I can’t even explain the feeling, it’s just incredible.”

Kelowna Olympian Kelsey Serwa hosted the event at the Delta Hotel in downtown Kelowna to a packed show featuring local musicians and some of the Okanagan’s most prestigious culinary talents.

In second place was chef Andrea Callan from Red Fox Club at Indigenous World Winery in West Kelowna and third was chef Chris Braun from RauDZ Regional Table in Kelowna. (YAY to our Chef Braun from the entire team at RauDZ Creative Concepts Ltd.!!)

“The judging team spent over an hour debating between the gold and silver medalists,” said Chatto.

“The two dishes were very different and hard to compare. Ultimately, we had to go back to the numbers on our judging criteria and we came to our winner. Less than a 1% difference, the standards were just so high in Kelowna. The line up of star chefs truly blew me away.”

Chef Koroll will now represent Kelowna, the Okanagan as well as the province at the championships in Ottawa on Jan. 31.

Read more of this article at Kelowna Capital News.