The acclaimed Kelowna chef and restaurateur will spend five days with Culinary Arts students in March. 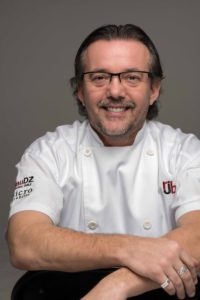 EDMONTON – Chef Rod Butters, a renowned promoter of local and regional cuisine, will share his expertise with Northern Alberta Institute of Technology (NAIT) culinary students as Hokanson Chef in Residence from March 12-16, 2018.

Butters, who owns three restaurants in B.C.’s Okanagan Valley and is opening a fourth this spring, has worked at hotels and restaurants in Vancouver, Whistler, Toronto and Hong Kong. He has earned numerous honours for his commitment to his community and its producers.

NAIT’s Hokanson Chef in Residence program, now in its 10th year, provides students with a rare opportunity to learn firsthand from the best chefs in North America. The program was made possible by a generous donation from John and Susan Hokanson.

“I’m incredibly proud and excited to be the next NAIT Chef in Residence. It’s an amazing lineup of previous chefs who have been involved. Many of them are friends and I’m humbled to be included. I can already tell this will be another career highlight for me.”

“This is a great way for us to celebrate Canada 150 and the 10th year of the Hokanson program. Chef Butters is a Canadian-born, Canadian-trained, Canadian entrepreneur, supporting Canadian cuisine and Canadian chefs. We’re thrilled to have him at NAIT.”

The Northern Alberta Institute of Technology (NAIT) is a leading Canadian polytechnic, delivering education in science, technology and the environment; business; health and trades. With nearly 60,000 credit and non-credit students and a 95 per cent employer satisfaction rate, NAIT grads are essential to Alberta’s prosperity. Known for hands-on, technology-based learning, NAIT engages with business and industry in applied research and innovation and provides corporate training around the world.

Recognized as one of Alberta’s top employers, NAIT provides outstanding returns on investment for its graduates, partners, the provincial government and the people of Alberta.